When the first style, number three, of the Tendo Combat is in place, the users are granted with superior battle abilities. Further; it is parent to one known technique that is to be utilized when this style of the Tendo Combat is in place. When utilized, the user is able to release a fierce punch that can break through strong defenses, such as the highly eulogized Repulsion Shield; additionally when having another layer that enhances its defensive and offensive properties in place.[1] 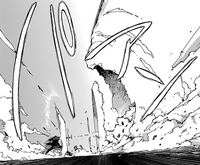 Retrieved from "https://blackbullet.fandom.com/wiki/Tendo_Combat_Style:_First_Style,_Number_Three?oldid=18241"
Community content is available under CC-BY-SA unless otherwise noted.